In the context of Stefan’s joint PhD at the ULB (with D. Gonze) and VUB (with J. Danckaert) in Brussels, he has theoretically studied the dynamics of two interacting microbial species in the chemostat. These species are competitors for a common resource, as well as mutualists due to cross-feeding. He demonstrated that this system has a rich repertoire of dynamical behavior, including bistability, and showed that the different steady state solutions can be well captured by an extended Lotka-Volterra model. This work was published in PLoS One. 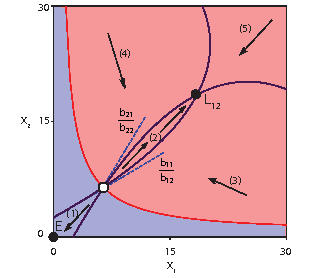 Pedro has studied the origin, stability, and bifurcation structure of different types of bright localized structures described by the Lugiato-Lefever equation. This mean field model describes the nonlinear dynamics of light circulating in fiber cavities and microresonators. In this work, published in Phys. Rev. E , we show how the organization (bifurcation structure) of these localized light patterns critically changes as one increases the cavity detuning, one of the important experimental control parameters in the system.

Adrian Saurin (Dundee Univ.) and Lendert have written a commentary on the potential roles of dynamic phosphorylation-dephosphorylation cycles.
They discuss how rapid cycles could underlie important signaling properties, including the ability to rapidly bind and release proteins. 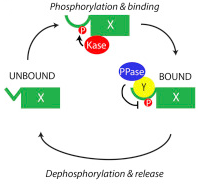 Jan’s work on delay models for the early embryonic cell cycle oscillator has been published in PLoS One . We showed that different implementations of the time delay can have a large impact on the resulting oscillation, exploring a fixed time delay, a distribution of time delays, and a delay that is state-dependent. Well done Jan and Alexandra! 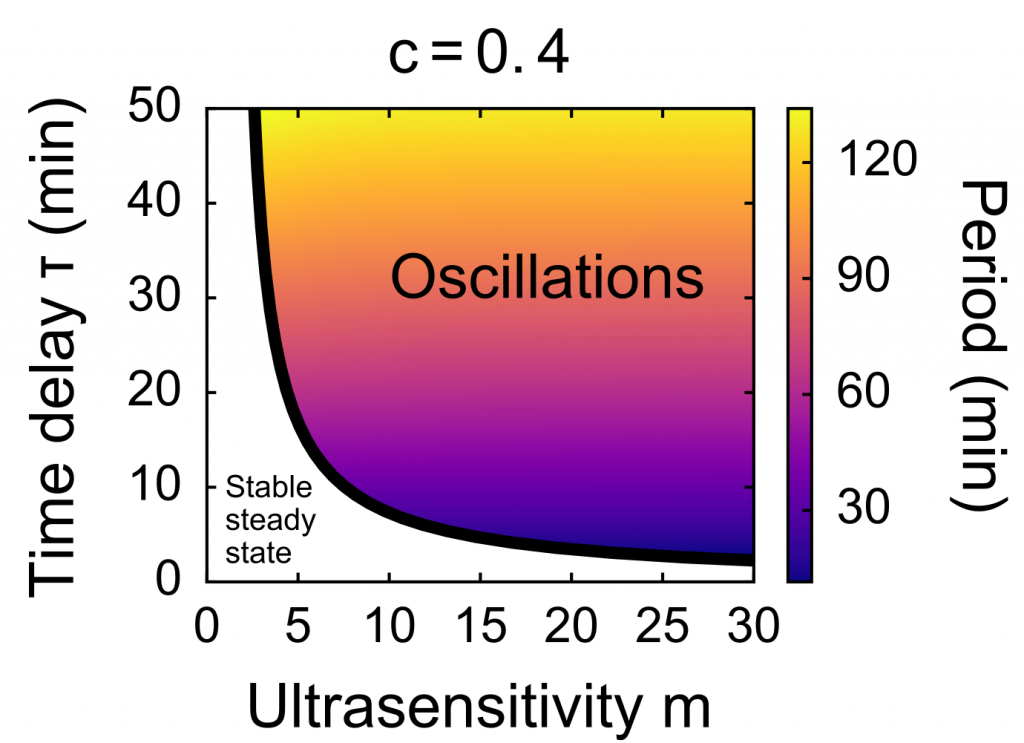 Lendert has been elected member of the Young Academy, part of the Royal Flemish Academy of Belgium for Science and the Arts (KVAB). On February 6, the Young Academy celebrated their five year anniversary and twelve new members were inaugurated with speeches by Prof. Robbert Dijkgraaf and the King of Belgium (http://jongeacademie.be/5-jaar-jonge-academie/). The Young Academy is an interuniversity and interdisciplinary meeting place for scientists and artists to work on initiatives related to e.g. science communication, policy, and education. 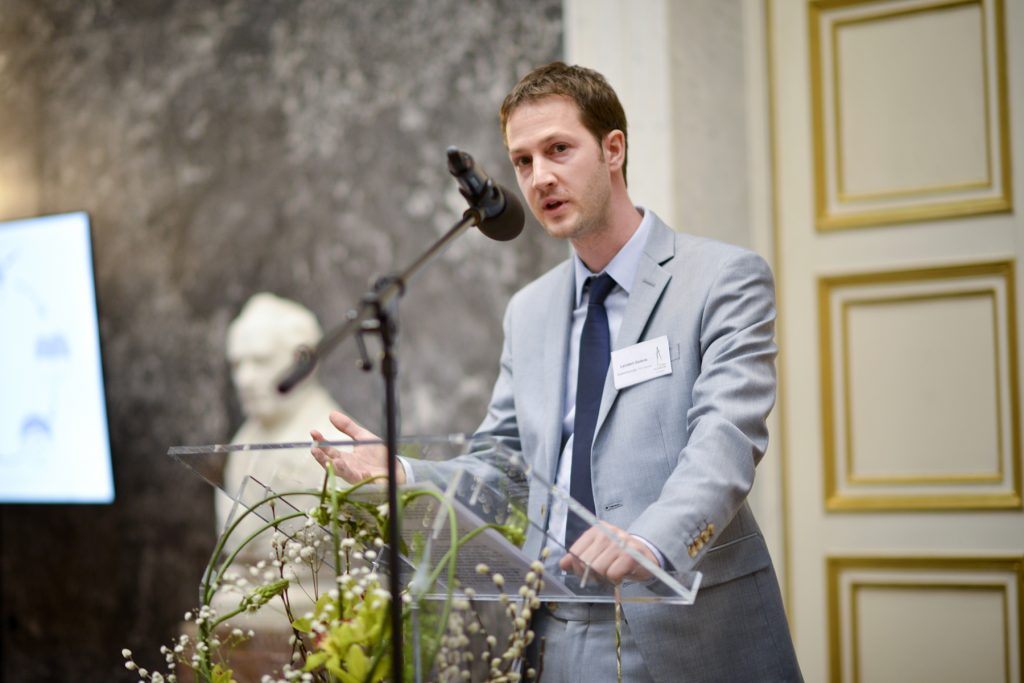 In a collaboration with Nela Nikolic from Isabella Moll’s lab at the University of Vienna, we have studied how growth heterogeneity in bacterial populations is modified by the ability of toxins to sequence-specifically cleave single-stranded RNA upon various stressful conditions. We focused on the situation where such toxins can be activated as a part of the mazEF toxin–antitoxin module in Escherichia coli. Congratulations to Nela and all co-authors for reporting on this work in Nucleic Acids Research! 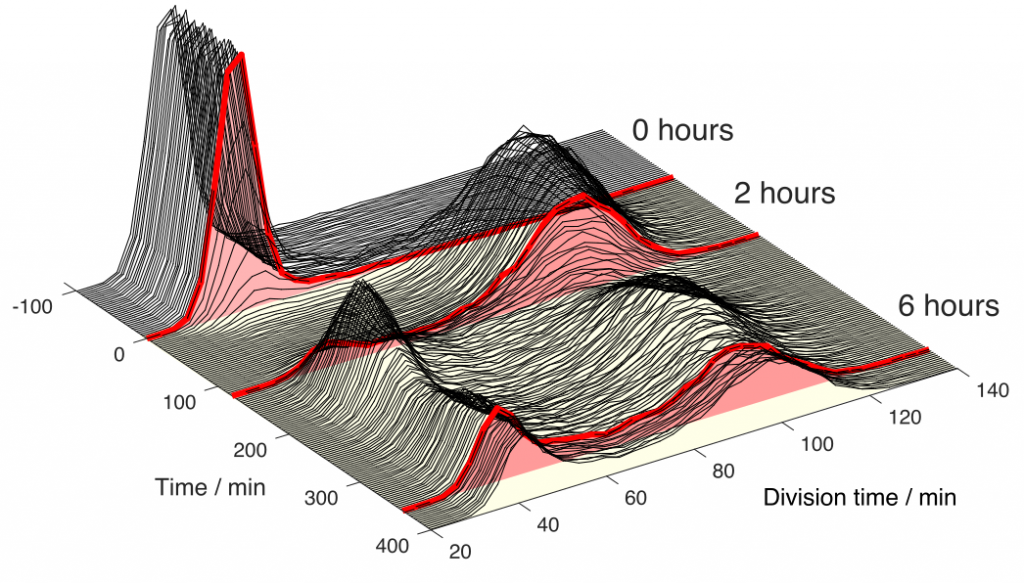 Congratulations to Junbin of the Bollen lab who just published his research in Molecular Cell. In collaboration with our lab, Junbin showed that there exists a transient phosphorylation signal (BUB1-T461ph) that plays a crucial role in correctly activating the mitotic checkpoint. This novel biochemical timer activates the checkpoint independently of the microtubule-kinetochore attachment status, and we show that disrupting this BUB1 timer holds therapeutic potential by targeting cancer cells. The paper was featured on the KU Leuven news. 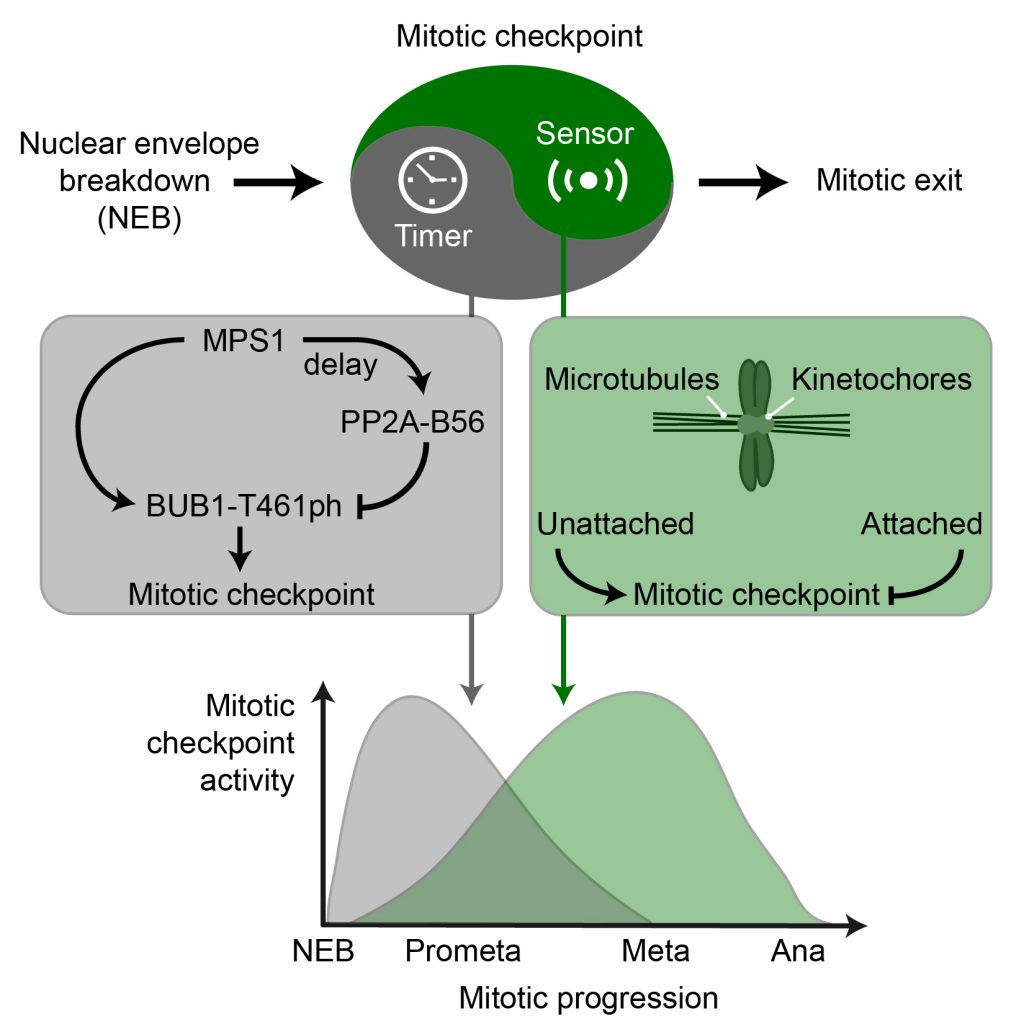 A warm welcome to Nadja D’Uonno and Felix Nolet, who just joined the lab! Their respective PhD projects will focus on experimentally investigating the influence of temperature on cell division timing, and developing theoretical models to describe the spatial regulation of cell cycle processes.

Adrian Saurin (Dundee, UK), Junbin Qian, Mathieu Bollen (LBT lab in our department), and Lendert have written a review article in Trends in Cell Biology  on how interacting kinases and phosphatases control mitotic processes in space and time. 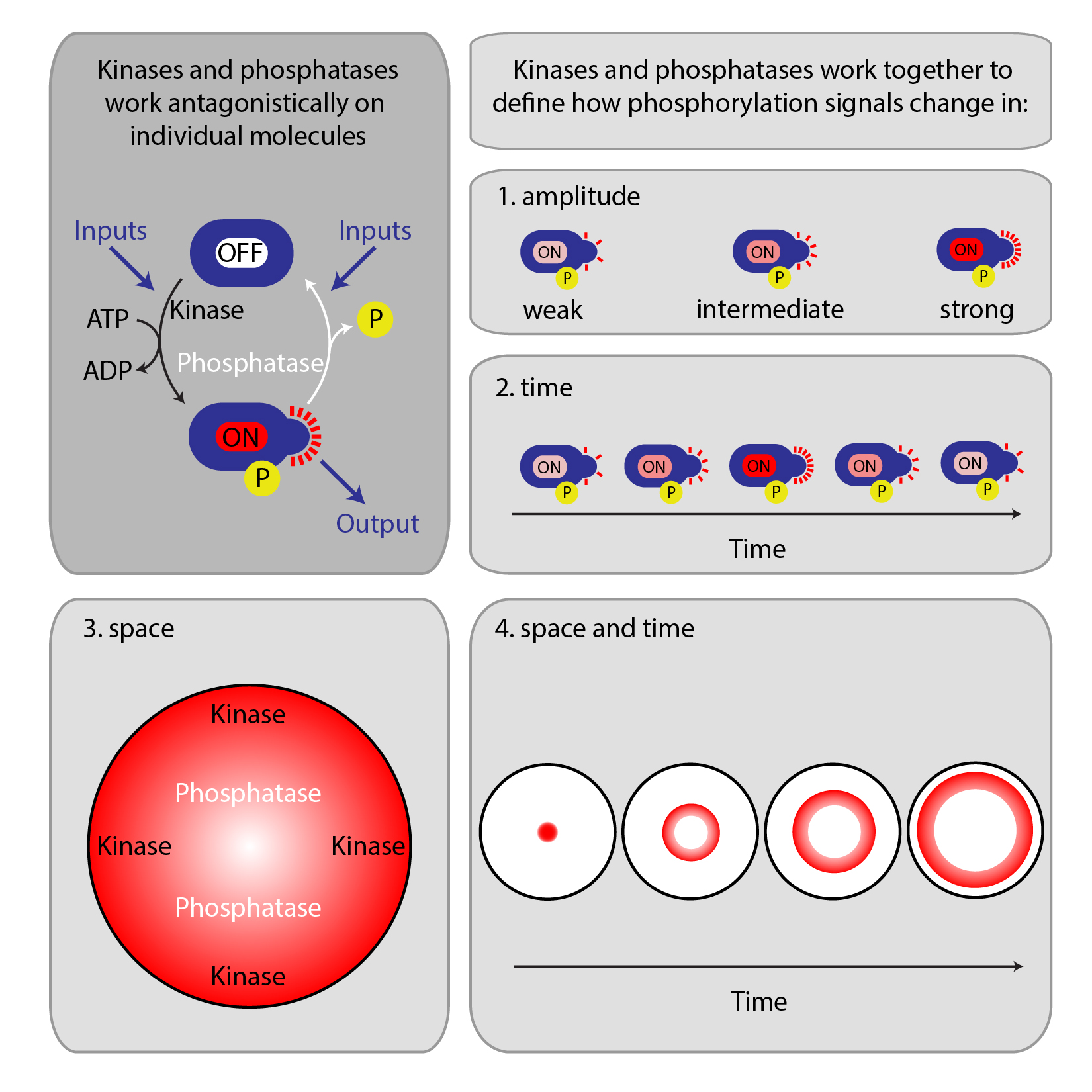 Alexandra, Jan and Lendert organized a workshop at the Children University event of KU Leuven. Several groups of children in primary school (8-12 years old) visited the university and they played several games in which they learned how more complex patterns can emerge from simple rules. The picture shows the kids applying one of Wolfram’s cellular automata rules using two-color cardboards. 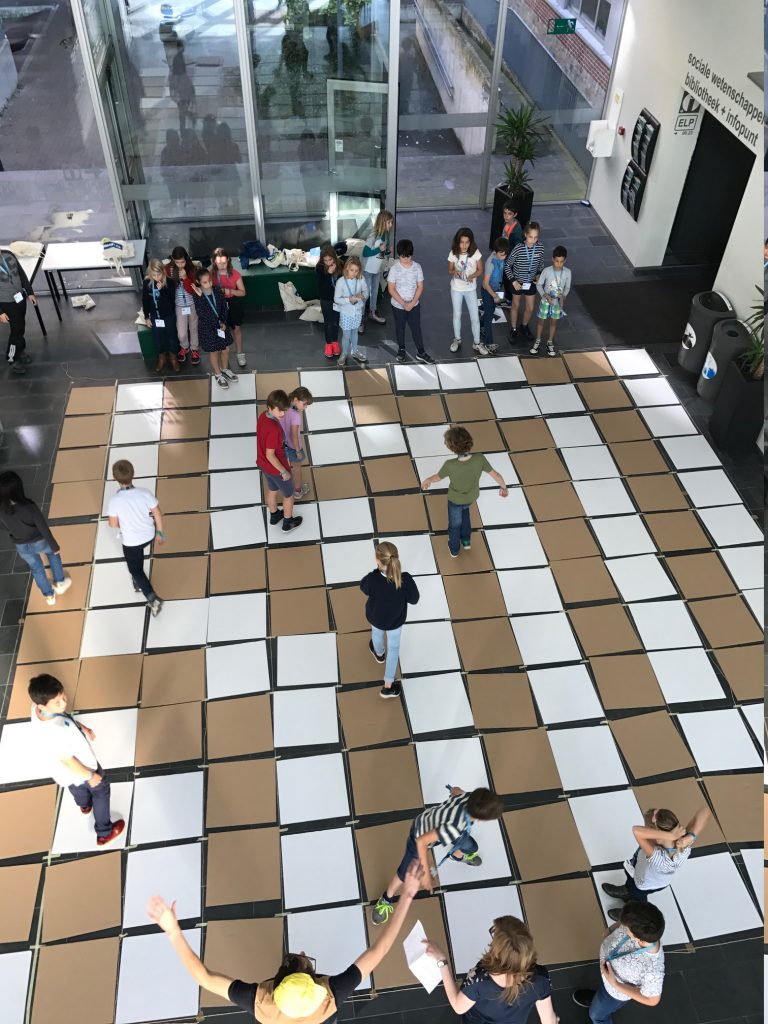